On this chapter I choose to recommend wine experiences in Douro, rather than tours of vineyards or visits to wineries. Let’s face it, no one takes absolute pleasure from looking at towers of stainless steel while having a tour guide describe the fermentation process for the 10th time that day. Here, I focus on the out of the box experiences that some of the Quintas offer, and which I find 100x more rewarding to you as a visitor and as a wine enthusiast. 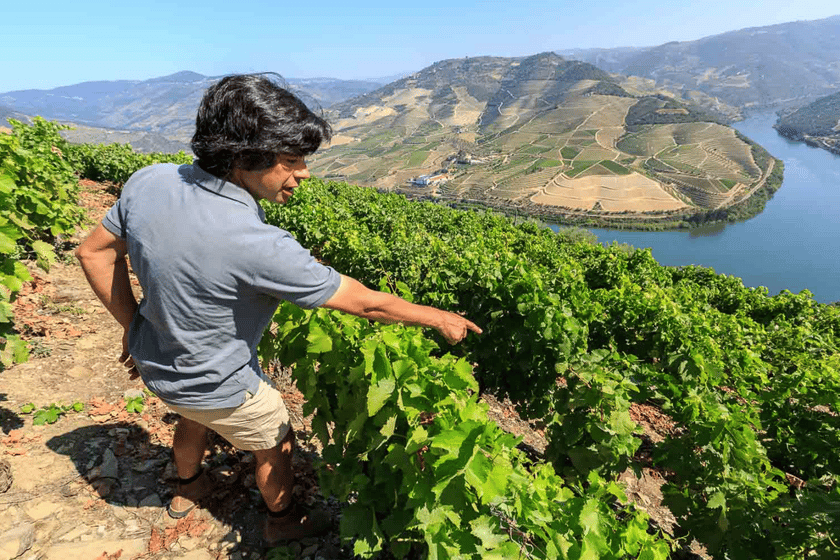 The Vintage Tour at Quinta das Carvalhas is the best wine experience in the whole of the Douro Valley!

I know it comes as a bold statement, but believe me, there is nothing even resembling it out there. It is the prodigal idea of Alvaro Martinho, the agricultural engineer at Quinta das Carvalhas and its operations manager. Disappointed with the way other Quintas neglected its visitors, he found a way to transmit to wine travellers what the "Douro Valley sense of place is all about".

In case you skipped it, a great part of the introduction to this Douro Valley Guide is based on the 3,5 hour conversation that I had with Alvaro, while he was driving me around the enormity that is Quinta das Carvalhas. It is the largest Quinta in the Douro with a colossal 600 hectares. He is a very interesting man, a man that feels the earth, the soil, the grapevines, the plants and the weather as if they are integral parts of him. From his perspective it is natural to start the story  with how the Douro Valley was formed and how the grapes have sculpted, not only the terrain, but the lives of the people that have chosen to make their life about wine. 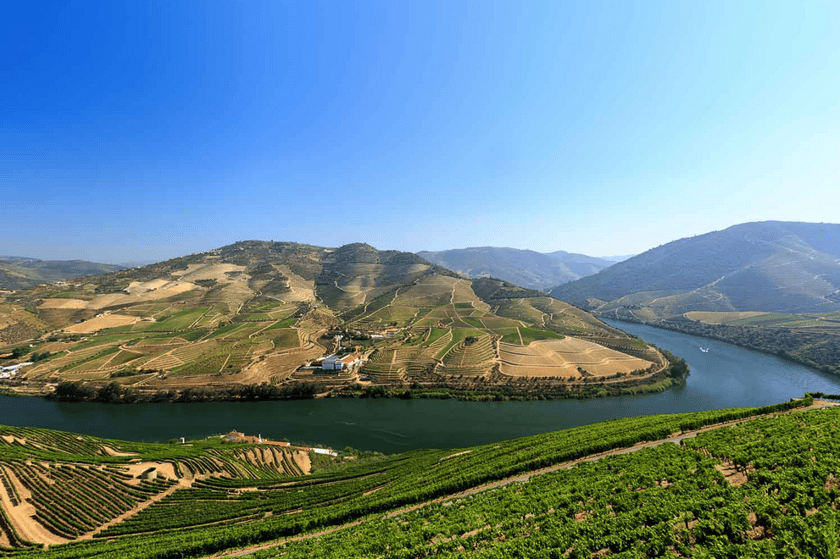 He knows all grape varieties that are planted at Quinta das Carvalhas, and tells the story about how the vineyard is a like community of well-behaved neighbours that work together in harmony, allowing each vine plant to produce the best grapes that it can. On top of this, his enthusiasm in telling this story takes place in some of the most breath-taking vantage points over the Douro, making his storytelling even more special. 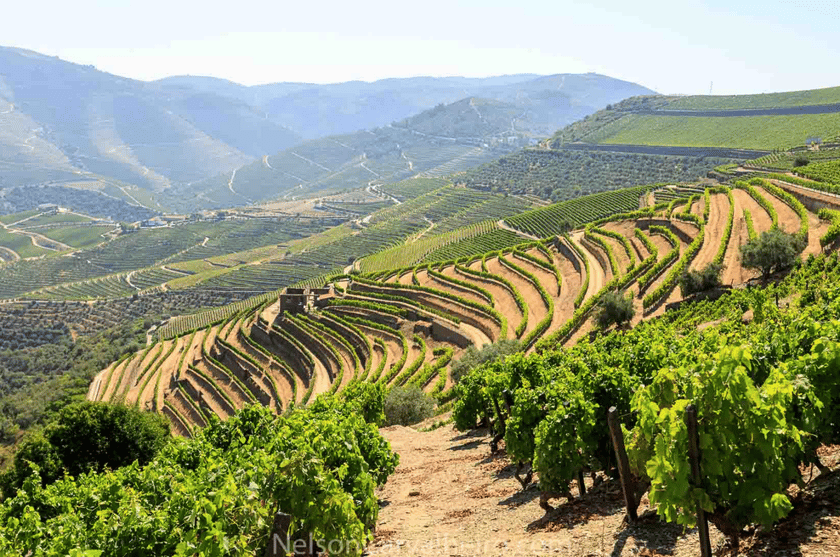 Hopefully at the end of the this tour you will understand that, when you drink a Douro DOC or a Port Wine produced at Quinta das Carvalhas you are not only enjoying a good wine, you are sampling what this reality is all about. I find the 30 euros per person ridiculously cheap, as I would happily pay 300 or more for so much of a perspective changing experience.

Wine maker for a day in Quinta Nova

Sónia Pereira is the resident enologist at Quinta Nova and the person responsible for the first ever Carvalheiro's 2015 DOC Douro Red Wine - the wine I blended with her guidance. I love this experience and strongly recommend it, as it gives you a hands on approach to DOC Douro Wines. Rather than just tasting and comparing several wines you can make your own blend. 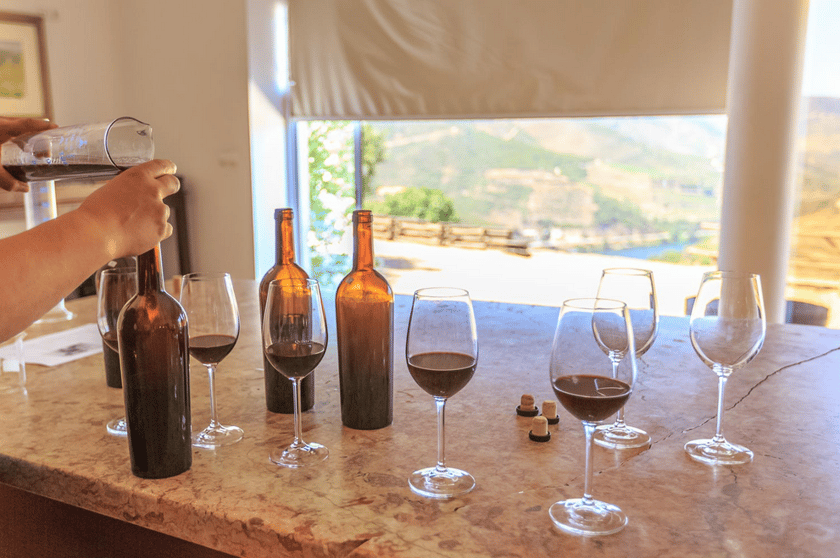 Sonia took 3 samples from different red wines in different resting stages. The first was a 2012 harvest, unoaked with 4 different grape varieties. Batch number two was a 2011 harvest with 1 year of oak maturation with 7 different grapes. The last bottle was 2010 harvest with about 14.2% alcohol with only two distinct grape varieties. Sonia took me through a simple explanation about what each wine is about and what I should look for when I smell and taste each one of them. Then she made 3 different blends according to my wish to have a balanced red, with about 13.5% alcohol, with sharp tannins and prolonged after-taste. The result was 50% of the fist wine and then 25% equal parts of the second and third. I am no expert, so it didn't take too long to reach one blend that was good for me. :) 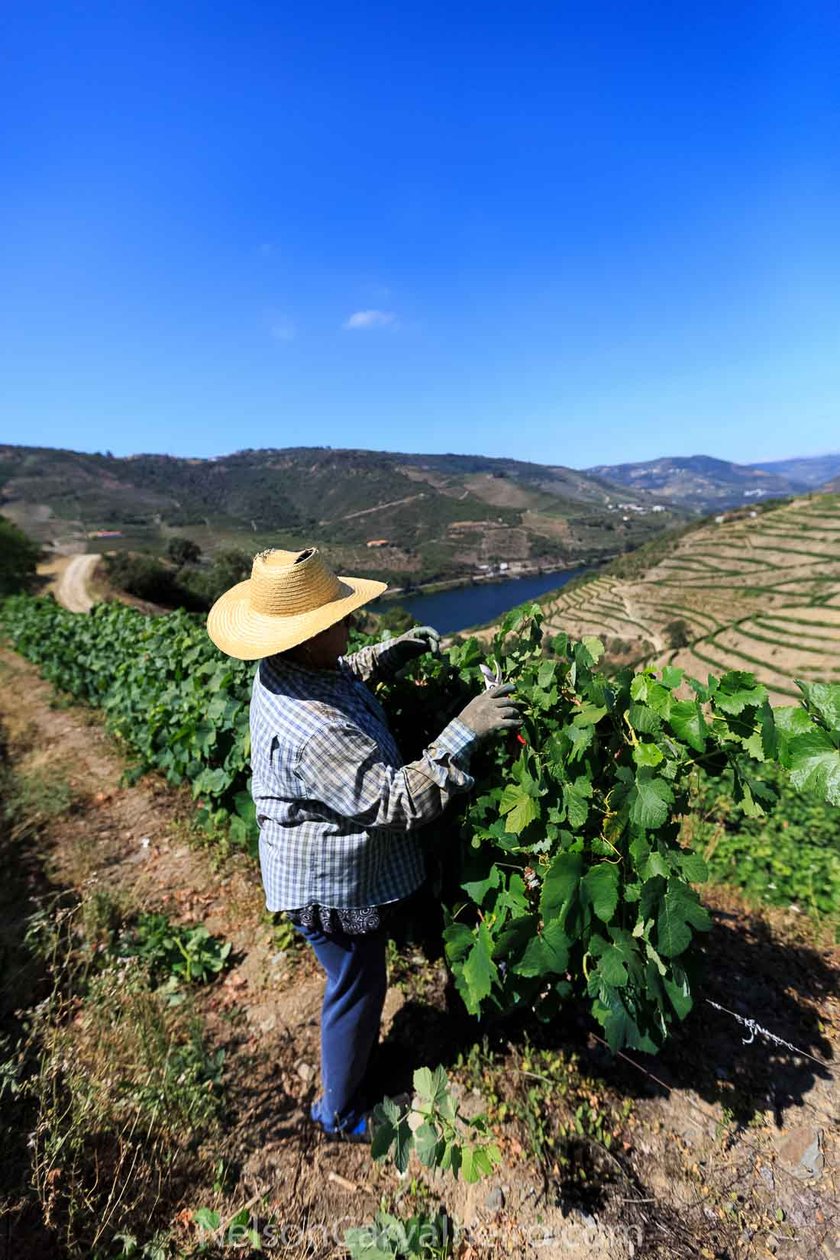 The wine maker for a day experience also includes a tour of the winery and vineyards. However I recommend that you arrive 1h hour before so you can explore the several walking trails around the vineyards. If you are lucky like me, you will run into some workers pruning the vines, or even harvesting them (September to October) and learn a bit more about life on the other end of the bottle. 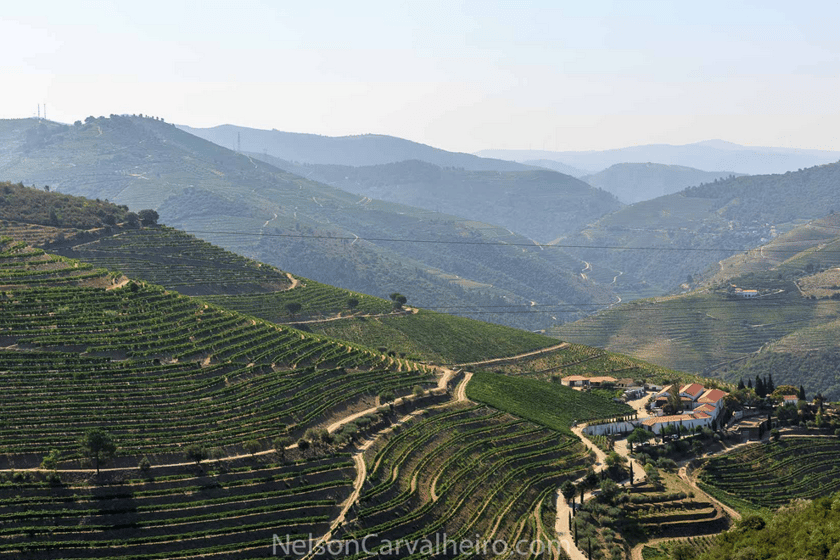 This was by far one of the most enjoyable experiences that I had while touring the Douro Valley. The hilly terrain and the insistence (thank God for this) of bridges can prove to to be a difficult when one is hoping from Quinta to Quinta in the Douro. Luckily nature has taken care of this a long time ago and I will say it now: the best way to enjoy the Douro is aboard a private yacht. 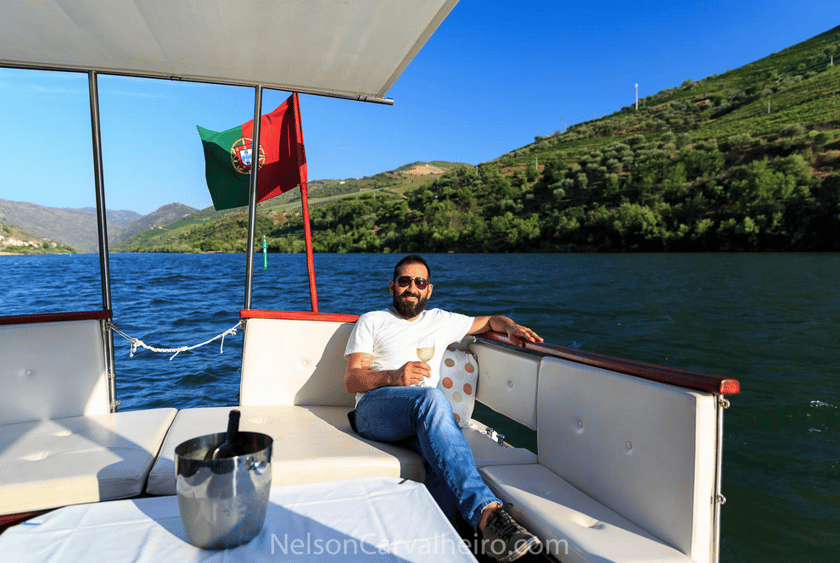 As you can see by the photos my Sunset Douro Cruise was nothing but pure relaxation. Just me, skipper Jorge Bronco, some crisp chilled white wine, the water and the unique backdrop of the Douro Valley. I sailed aboard the Pipadouro II, a 10 meter yacht which is comfortable enough for a couple or a small group of friends. With all the dam system that was built in the main river valley, the Douro River is now basically a series of lakes were the current is almost non-existing, so you don't have to worry about swell or waves. 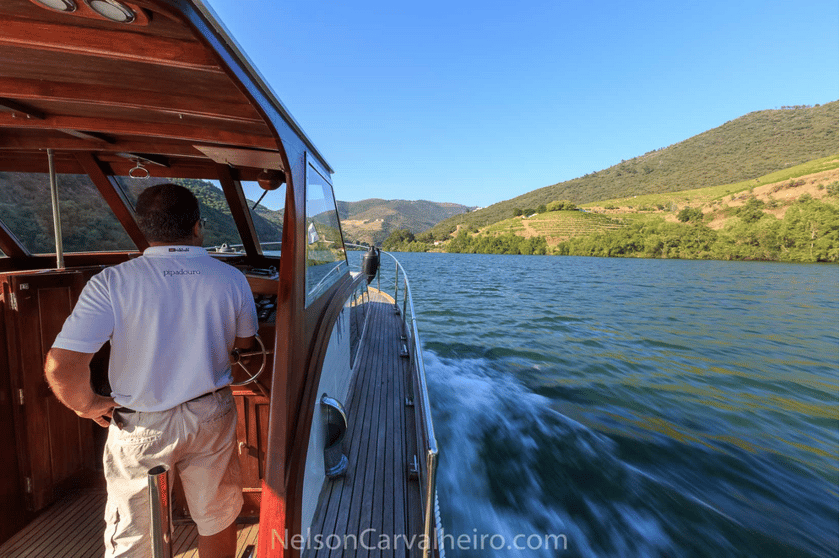 I specifically asked the skipper to travel upstream, all the way to Tua (a small little village) as this would take me to the less touristic part of the Douro. The journey takes about 2 hours (one hour each way) and here you can see all the vineyards, estates and Quintas which are not open to the general public. Some of the most impressive are the Quinta da Romaneira (which used to be a luxury hotel until it was recently bought by 32 Million euros by a Brazilian banker), Quinta do Pessegueiro, Quinta do Roriz, Quinta da Vila Velha, and Quinta dos Malvedos (where the La cage dorée film was shot). 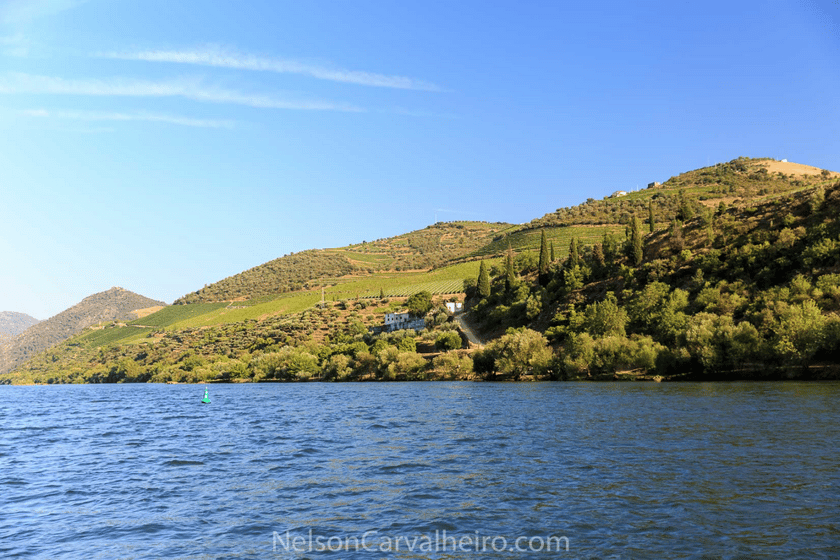 My personal recommendation is to leave this experience for the last day of your stay in the Douro Valley... You will thank me later.

This is my list of the best wine experiences in the Douro Valley. On the next post of my Douro Travel Guide I will focus on the best food experiences in Douro. I'm sure you don't want to miss it!

Ambassador and Travel Consultant at Wine Tourism in Portugal

Nelson Carvalheiro is a Travel Writer and Photographer inspired by the soul and sense of place of the locations he visits, the people he meets and the food he tastes.

Having worked in Portugal as a luxury hotel manager for many years, Nelson is now dedicated to helping his fellow travellers who are looking for advice, but mostly, to inspiring people with his passion for travelling and discovering new places and cultures. More about Nelson Carvalheiro at nelsoncarvalheiro.com 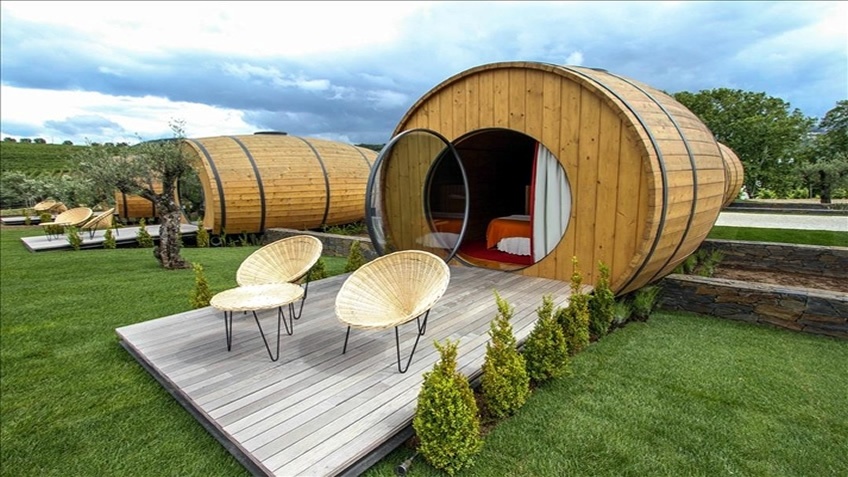 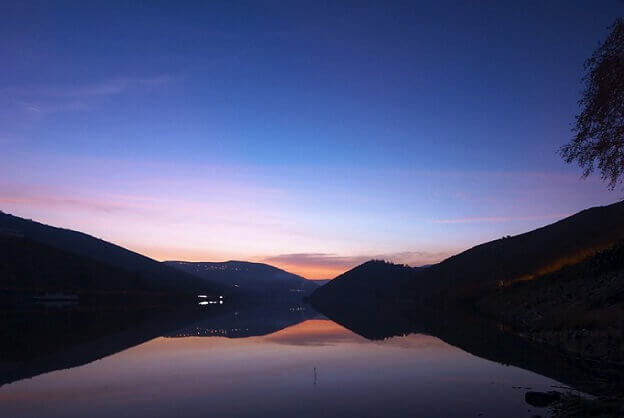