The complete Guide to Urban Art in Porto

One of the points not to be missed when traveling to Porto is urban art. Corner by corner, prepare to fall in love with the stories told by the city walls. Here you will find much more than small graffiti, but an open-air contemporary art gallery. Book now, with us, a tour of the incredible city of Porto. 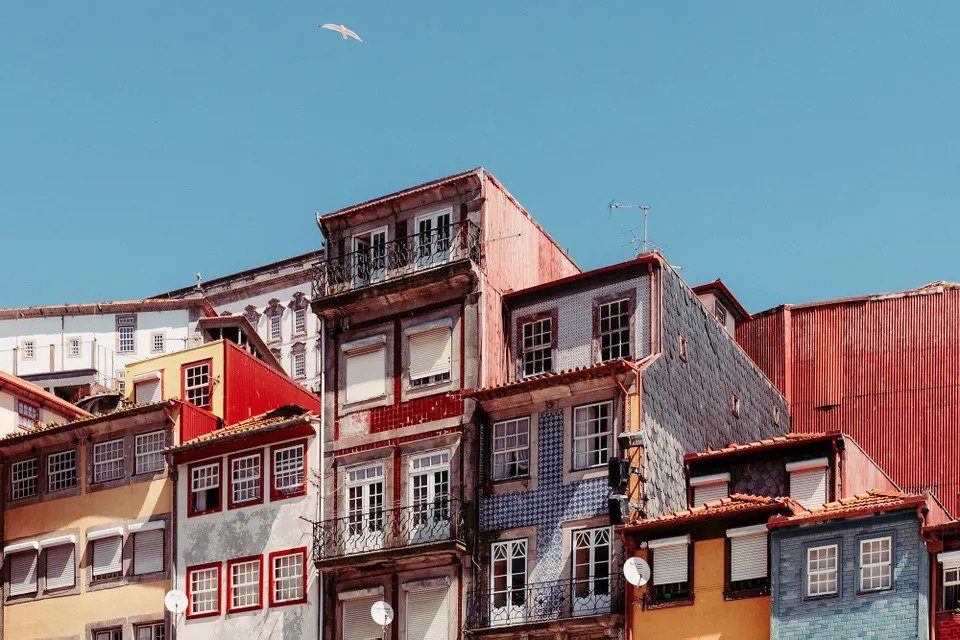 Some of the street art in Porto is more on the side of 'big bubble lettering' and tagging with artists who just want their name to be better known, but some show real artistic skill. Stencil art, the style of artists like Banksy, can often be seen in black and often with an underlying message. 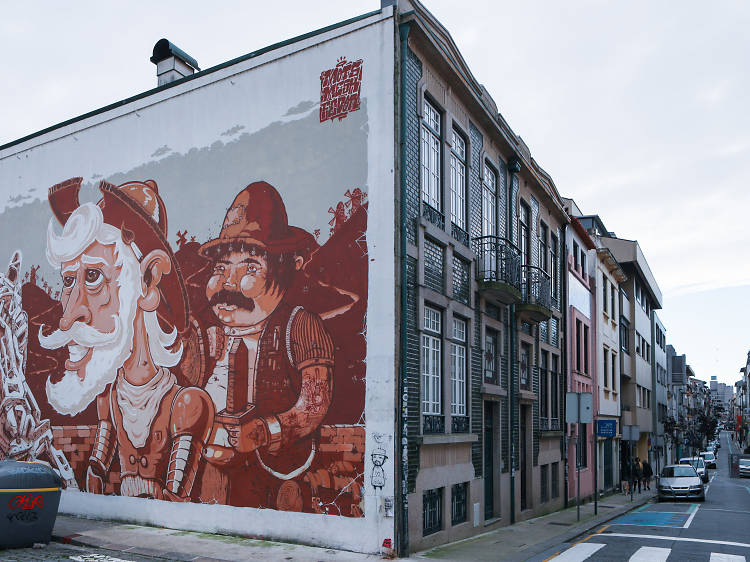 Wandering around the city and hunting down these stunning pieces is one of the favorite things to do when staying in Porto and that's why today we bring you a list of the best and most iconic street art designs in Porto and where to find them. 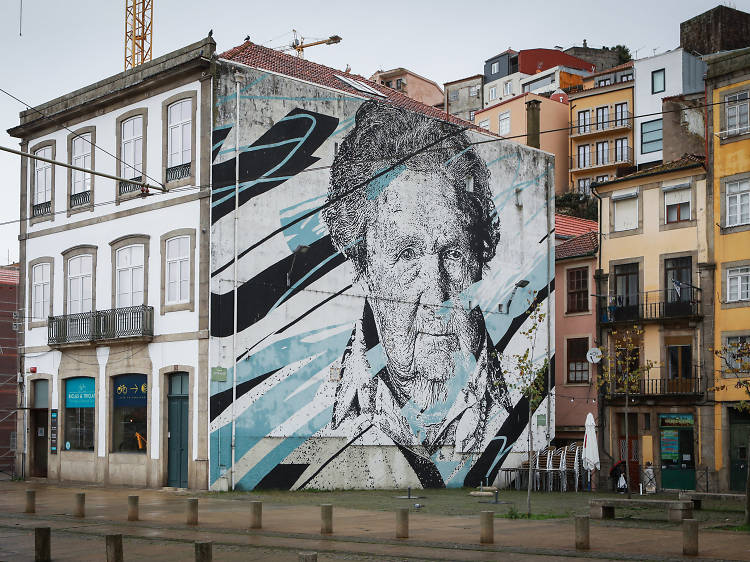 This is a very illustrative example of the large-scale and detailed stencils that characterize the work of Daniel Eime, an artist from Caldas da Rainha who lives and works in Porto. The painting he made in Miragaia shows the expressive face of an elderly woman, framed as usual in an abstract composition dyed in blue. It is not a particular figure, but a portrait of the aging population of this riverside area. 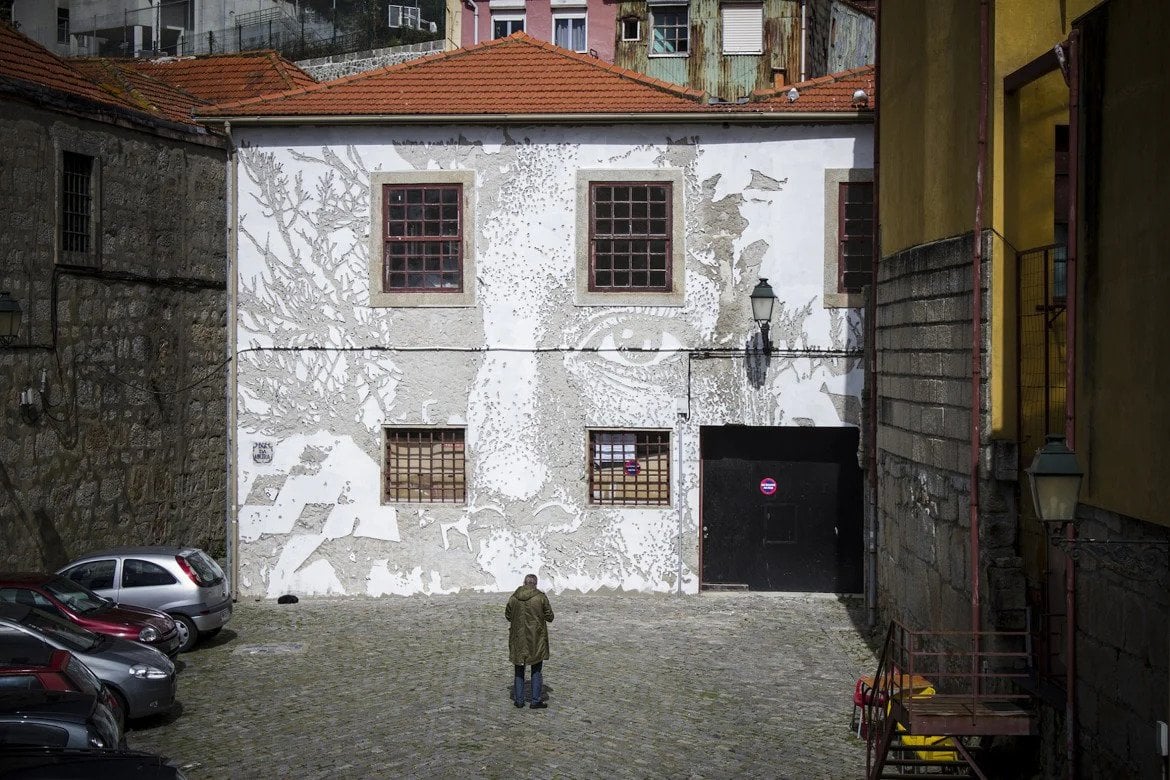 Also in Miragaia is the first public work by Vhils in Porto, more precisely on a historic façade from the 14th century. In 2016, Look At Porto invited the artist to intervene in the building, then rehabilitated to be a movie theater. The result is a figure that combines human and natural elements and whose gaze hovers over the historic center of the city. The wall is on a street that opens onto a square and is visible from the waterfront. 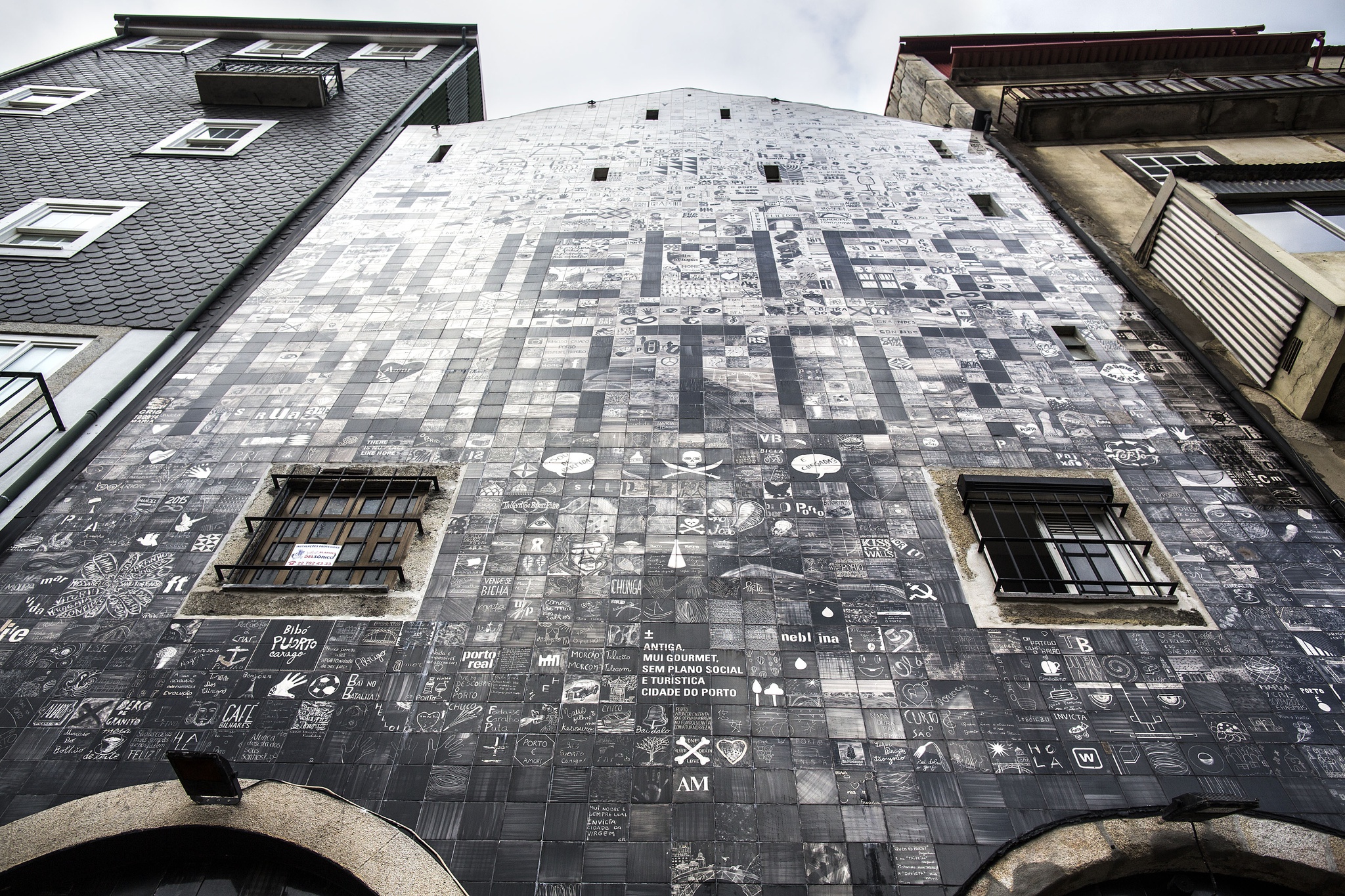 Conceived by the artist ±MaisMenos±, this work consists of three thousand tiles and had dozens of participants, professionals, and amateurs. Each one had to answer in the ceramic pieces the question “Who is Porto?” This urban art action was developed by the Locomotiva project. The mural occupies 135 square meters. 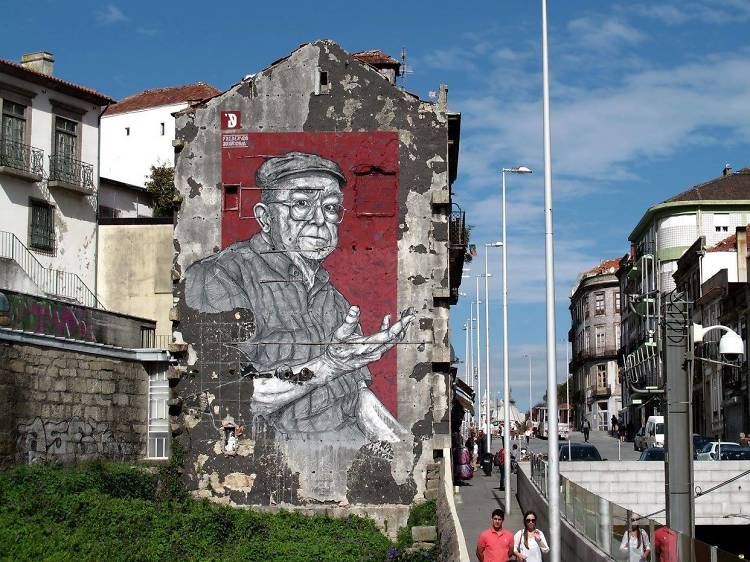 Hospitality is part of the essence of Porto and is well represented in this work by Frederico Draw. The visual artist, who masterfully works with the human figure, decided to portray his grandfather extending his hand almost as a welcome to those who enter the city via the Luís I Bridge. Despite the great personal burden, this is one of the most successful among people from Porto and foreigners, who can't resist pointing their lenses at it. 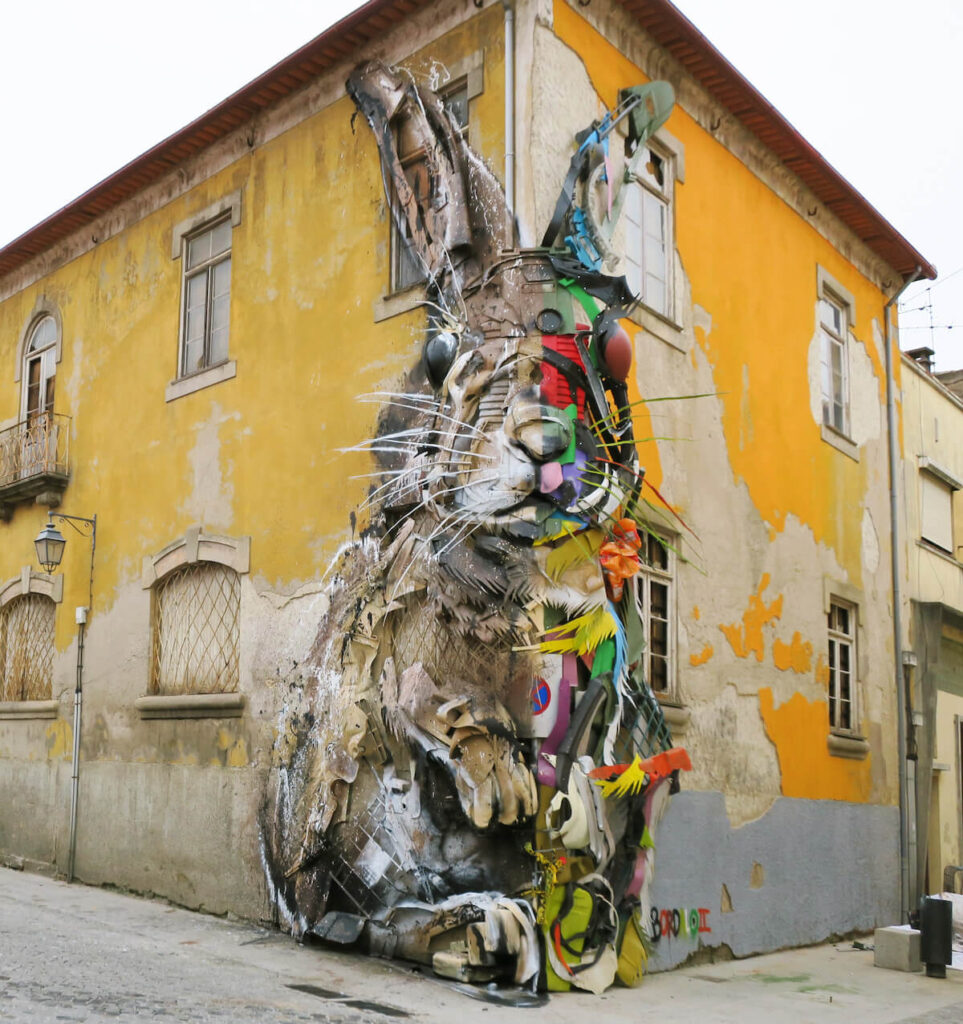 The large animals created by Bordalo II from tons of waste are all over the world. In 2017, in connection with the Gaia Todo Um Mundo festival, the Lisbon artist left his mark on the facade of a building on the quay of Gaia. As usual, he collected rubbish from the surroundings and sculpted a rabbit, half colored and half a gray to show the original colors of the materials and to raise awareness of issues such as sustainability, consumerism, and pollution. 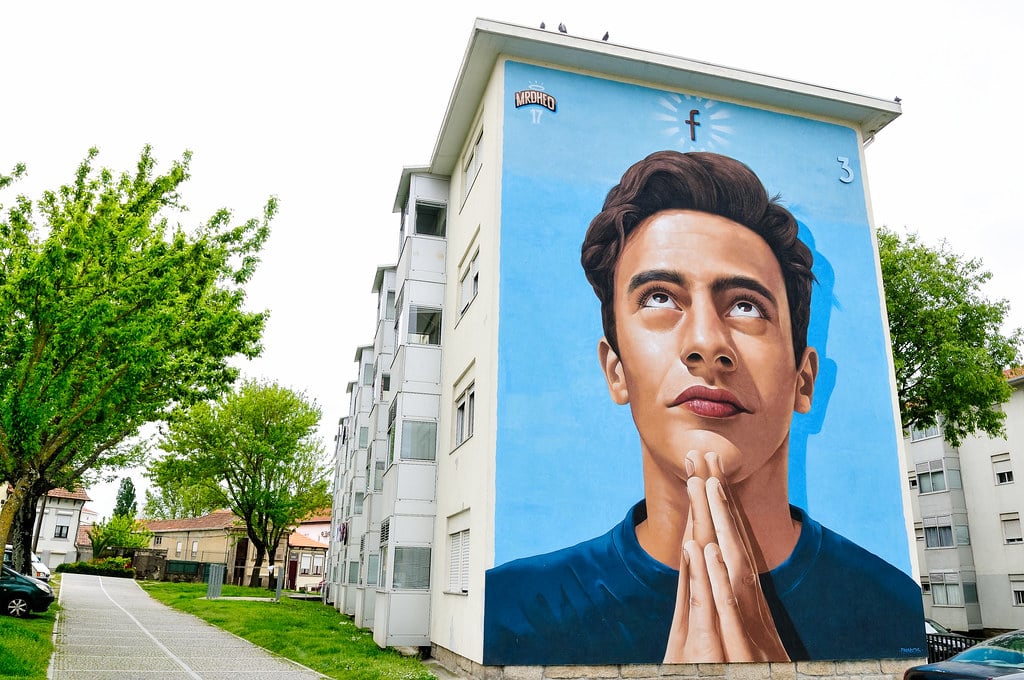 Contrary to the stigma and negativity associated with housing estates, and in an attempt to add diversity to the city's culture, the municipality of Porto left it in the hands of Mr. Dheo and Hazul to paint the facades of two buildings. Mr. Dheo painted this mural, called Modern Religion, in Bairro de Francos, and Hazul expressed himself in Bairro do Carvalhido. 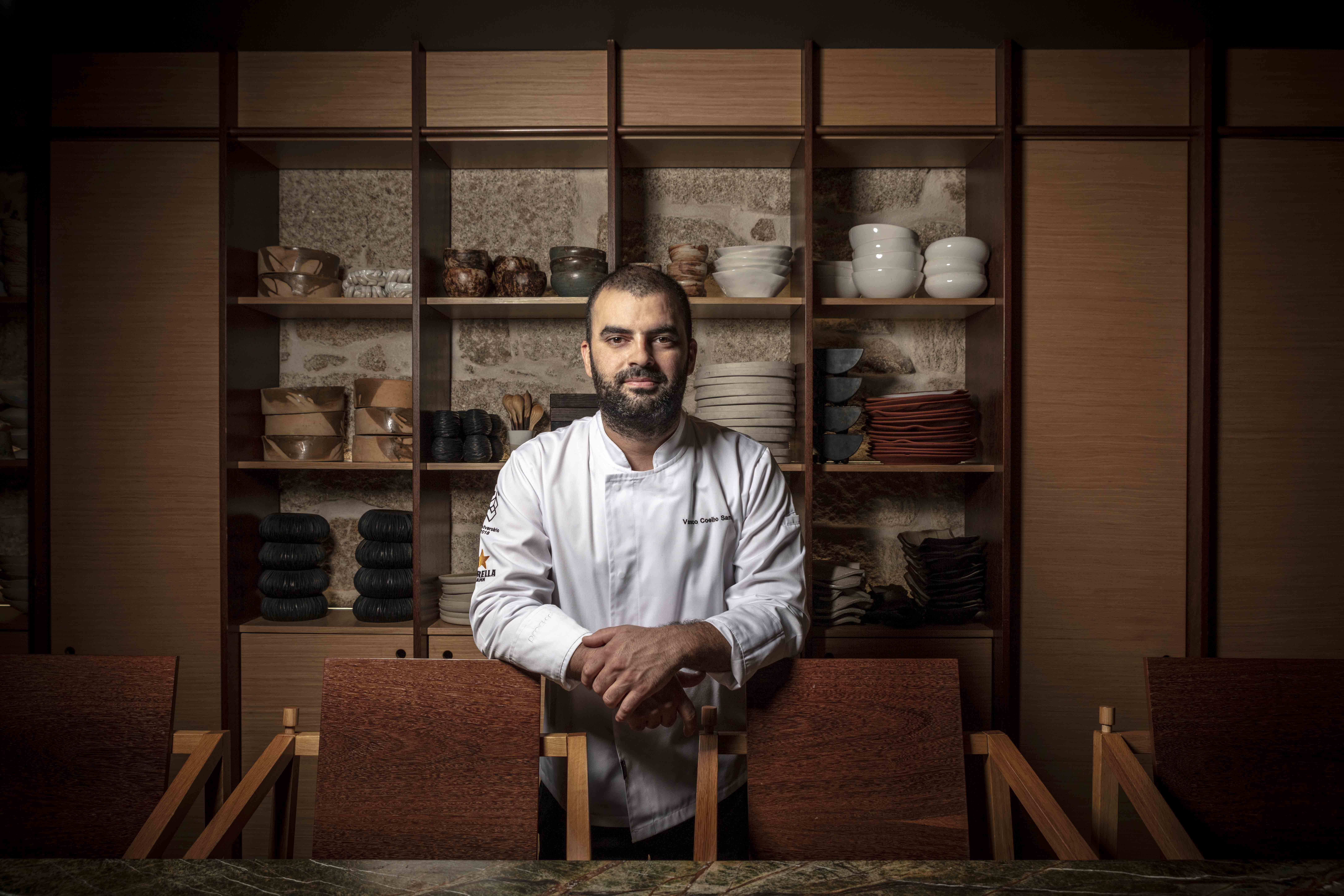 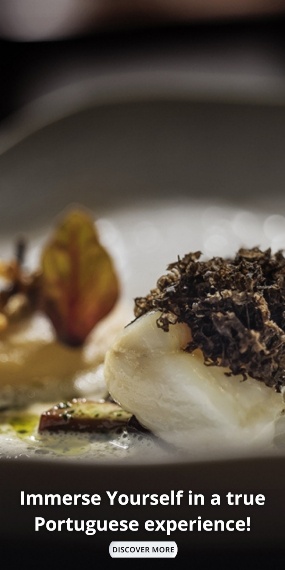